The hate speech against Korean in Japan, No books of “anti-Japan” in Korean bookstore? 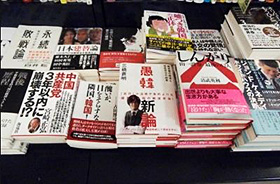 I can understand the voice to go too far.
However, it is the freedom of expression.
It is a difficult problem.

There is a country called Korea which caused it.
Harassment for Japan is terrible.
And Japanese get angry.

There are many some Korean net articles and pictures.
The hate speech is natural if I watch it.
However, actually, a question “not to be an anti-Japan in Korea” so came out.

There are many books which performs bashing of Korea in the Japanese bookstore.
But, the Korean bookstore does not have many books of “Anti-Japan”.

If it is fact, I am ashamed.

I can understand the reason warned of the Hate speech from the United Nations.

If Japanese excuse it, they will say that the media has a problem.
It will be the buck-passing.

I think that japanese would be condemned from the world again.
I feel sorry.